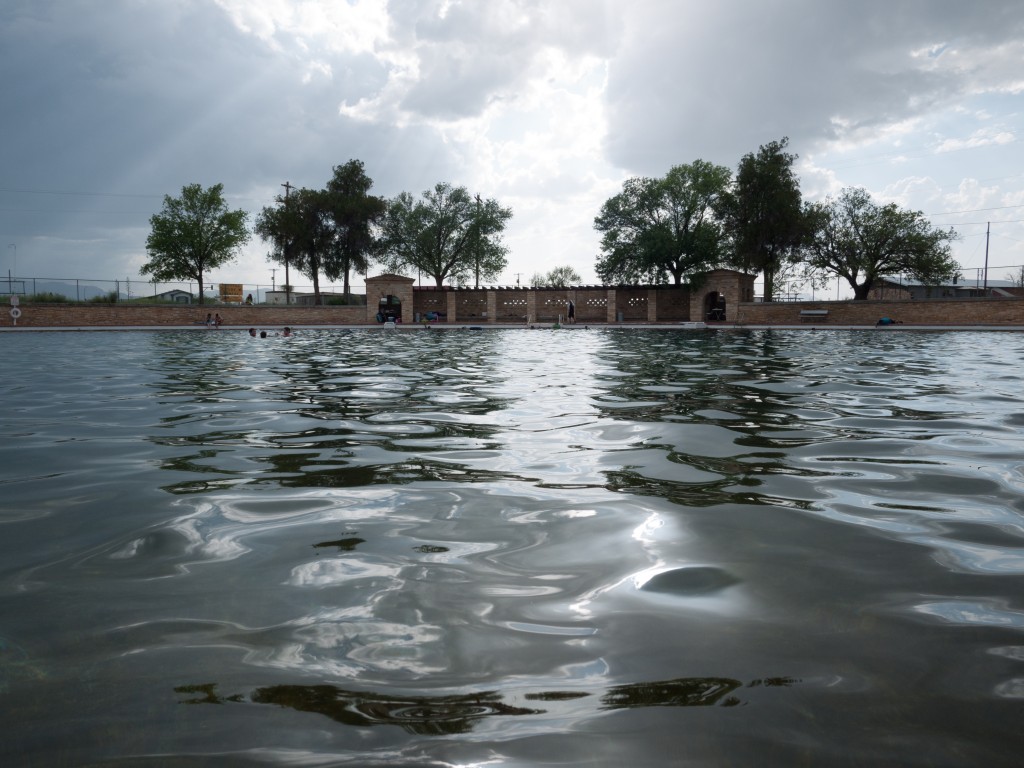 When most people think of West Texas they think of hot, flat, and dry. Those people are right. This is the land of cactus and mesquite bushes. In this barren land Balmorhea sits there as an oddity. The world’s largest spring fed swimming pool sits in the desert.

The name Balmorhea is a portmanteau from the name of three land promoters. Balcom, Morrow, & Rhea. They established the town in 1906. Twenty six million gallons of 74F water come out of the ground every day. The pool itself has a capacity of three point five million gallons, which means the water in the pool is entirely replaced 7.4 times per day. The pool itself was built during the great depression of the 1930s by the Civilian Conservation Corp and remains largely unchanged today.

A trip to Balmorhea is a purposeful one. You will spend many hours driving through the unforgiving desolate expanse of west Texas crammed into the seat of a hot car. After this journey the image of Balmorhea is about as welcome as a cold beer after mowing the lawn on a summer day or arriving home after a long plane flight riding in coach. Since you are halfway to nowhere you will likely want to stay the night at some of the local motels or at the San Saloman Springs courts motel rooms located in park itself. Having a reservation for the night at the park itself also ensures that upon your arrival you can get in even if the day use is full and there is a waiting line.

The first thing the pools make you want to do is to dive deeper and surround yourself with the many species of fish. Mexican tetras, headwater catfish, comanche springs pupfish, and other species. This is not a swimming hole that you want to stay on the surface, though one wing is about five feet deep. Very quickly you are drawn to the rest of the pool which is about twenty feet deep. Bring a set of goggles or even better bring a full snorkel. 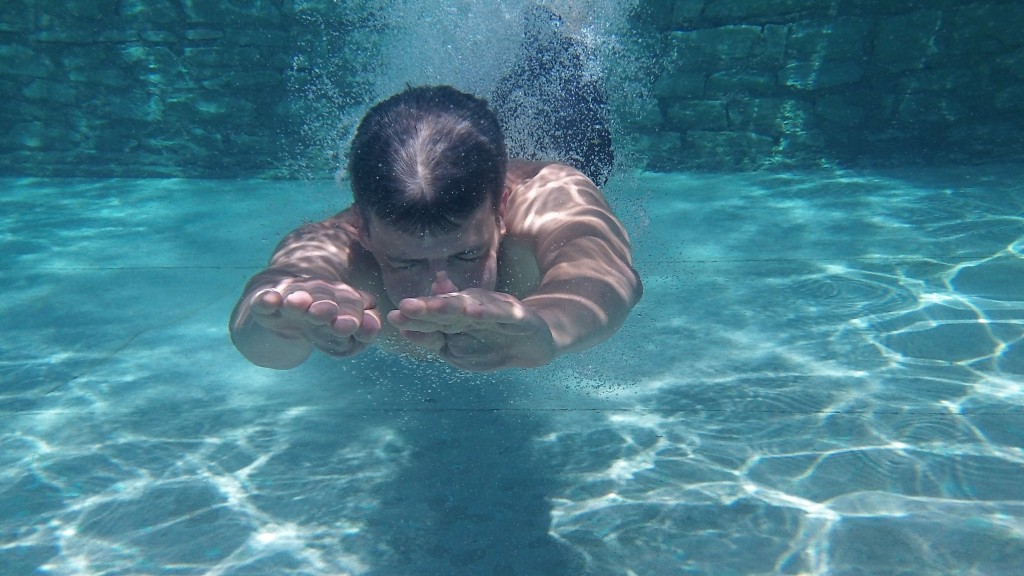 Lampasas is in the middle of nowhere but is on the way to everywhere. Highways 183, 190, 281, and FM 580 all collide here. People usually just stop long enough for a red light or two. A few more stop long enough to put some gas in their car and some food in their bellies. Most don’t realize that if they had an hour or two extra for the journey they’d be able to find someplace that might exceed both their origin and their destination.

Old Fashioned. As the oldest spring fed swimming pool in Texas Hancock Springs hasn’t changed much. I expect if you came here in the late 1800s or early 1900s you’d recognize it as not too different from today. Big pecan trees provide deep shade to picnic tables. Lifeguards sit under a large umbrella scanning the pool for kids who can’t swim quite as well as they thought they could or who wandered too far from the shallow end. From time to time they whistle the kids out of the pool for adult swim. There is no diving board, just an end of the pool you can dive off the edge from. Simple, pure.

People come for the water. It comes straight up out of the ground ground on one end and overflows down to the nearby creek on the other. It comes out cold and clear year round. No pumps, no chlorination, no filters, no influence of man. Locals say the water heals your cuts and is good for other ailments of your body. If you ask them if the water heals your mind and your soul I expect they’d say it heals those too. 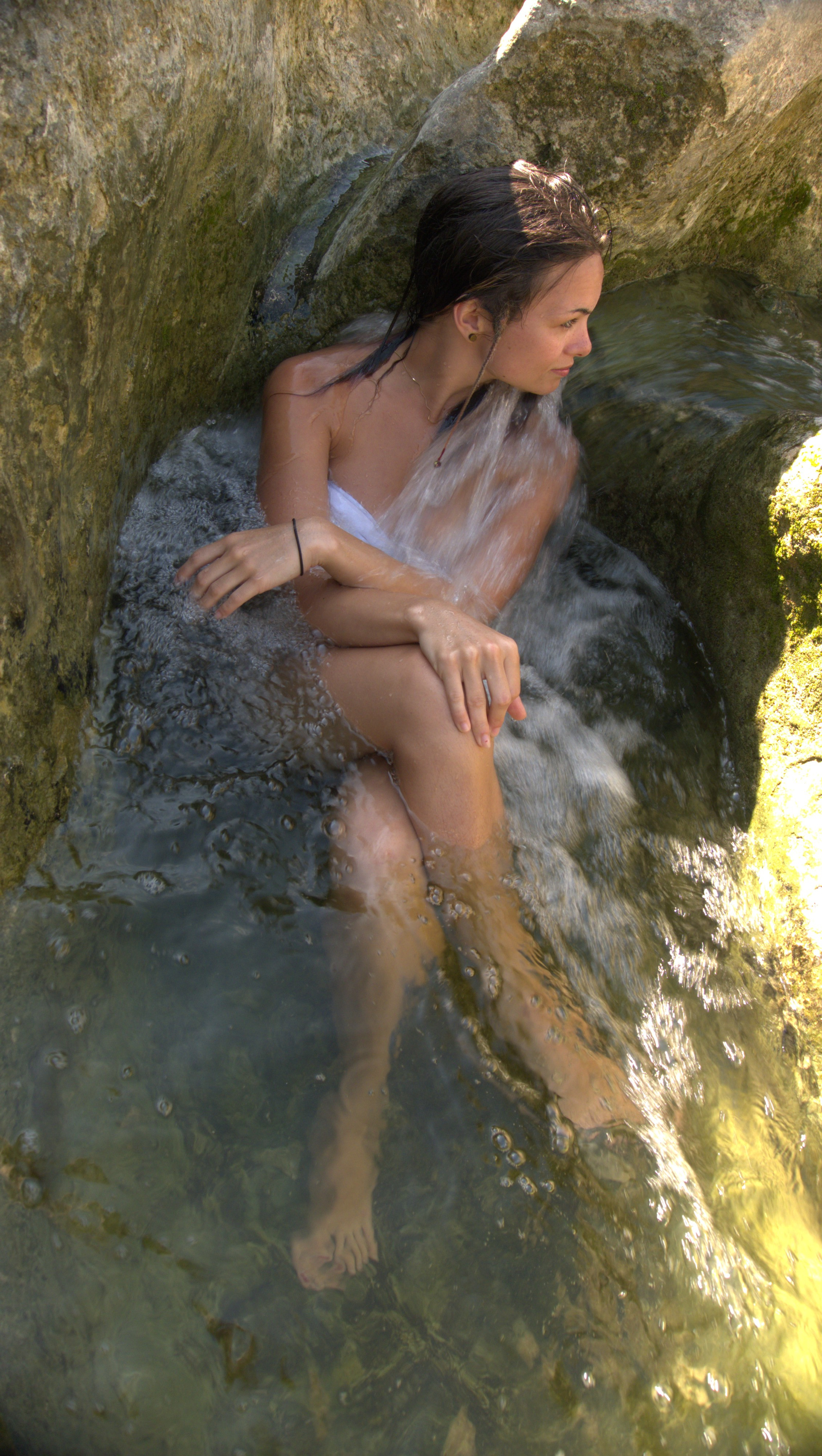 Water sculpts the rock here into many narrow channels that form miniature rapids. Some of these rapids are sized just right for a person to lounge in. Below the rapids lies a deep pool with one bank lined in trees and the other lined with a five to eight foot high cliff. Above the channels lies shallow water perfect to wade in while throwing a frisbee.

Sculpture Falls is the farthest swimming hole from a road of any in Barton Creek. The distance is not too far for those used to hiking, but is far enough that it tends to be a little less crowded than some of the others. It is far enough that a heavy cooler would seem a burden even to the very fit.

It is not the quantity of people that makes this spot more enjoyable, there are still quite a few people. Instead, it is the fact that those who would purposefully pick the farthest hike in Barton Creek to swim tend to be really enjoyable people to share space with. Everybody who is there has earned it and in the earning of the enjoyment have found a greater appreciation.


Waterfalls, giant cypress trees, clear cold water, camping, a butterfly garden, a rope swing, an unchlorinated spring-fed pool. Krause Springs is one of the best swimming holes anywhere. The authors of this book would like to take a moment to thank the Krause family for opening up their home to the public. We can’t describe this place well enough to do it justice except to say it is a true Texas gem and if you haven’t visited it you are missing out.

It’s also worth stopping at Opie’s barbeque right at the turnoff from the main highway either on your way out or even better on your way back. Opie’s is a BYOB establishment. They also have some of the best sides of any BBQ joint in Texas. Tater tot casserole, three kinds of cobbler, brownies, banana pudding. Sometimes it’s hard to know if you are going to Krause Springs for the swimming or because Opie’s is right next to it.